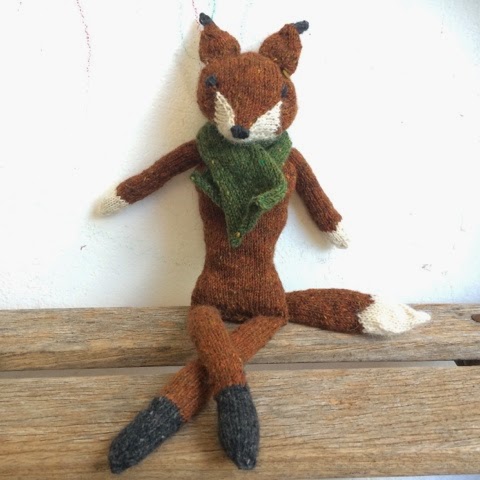 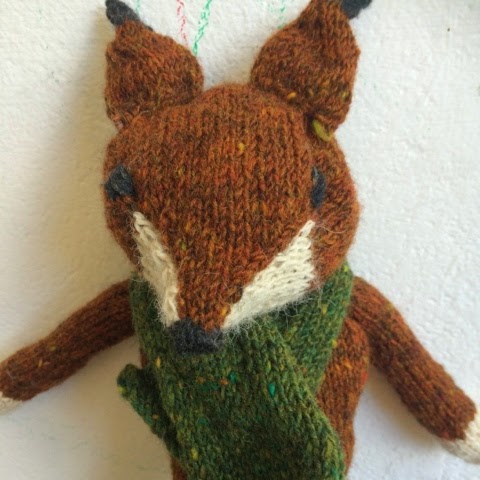 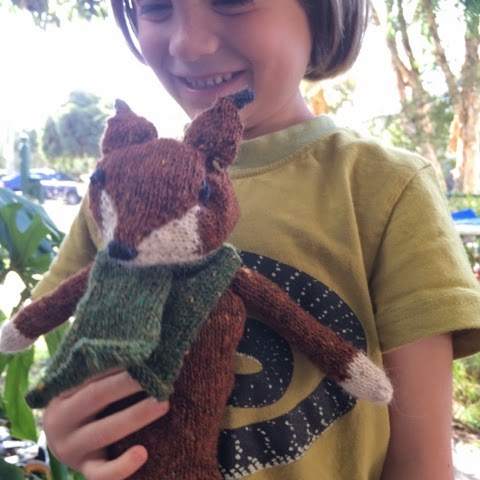 The mister is pleased.
Ravelled here

*Foxie nearly finished..a morning knit with Kirti, of Lavida Rustica, Madame of the sock.
*Longing for a reprise of knitting nights with the ladies and a return to the spinning wheel!!!!!
*Percy and I spent a week at the safari zoo!!
*Ivy reminds me what a sublime age 12 can be.
*Full on life of supporting my very lively three.
*Day dreams of a fibre filled Autumn. 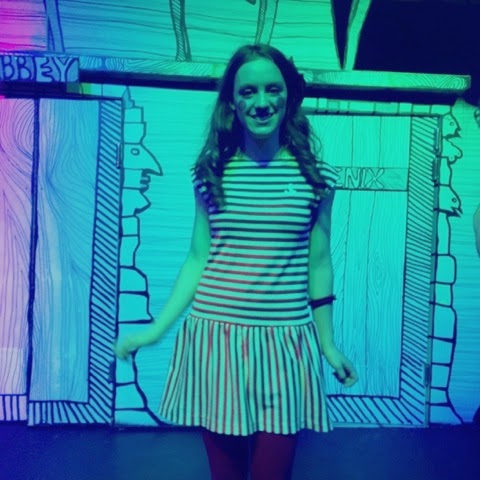 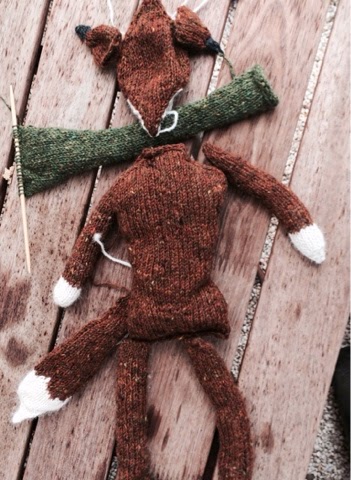 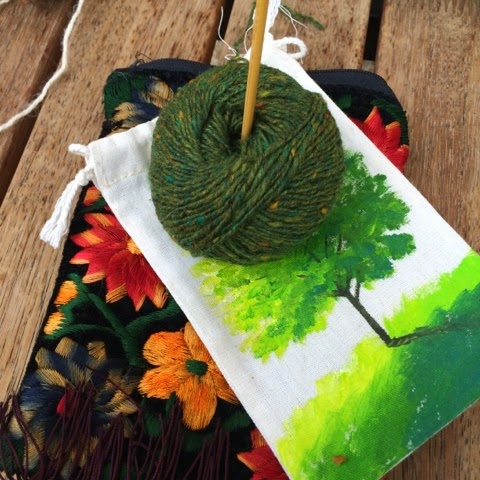 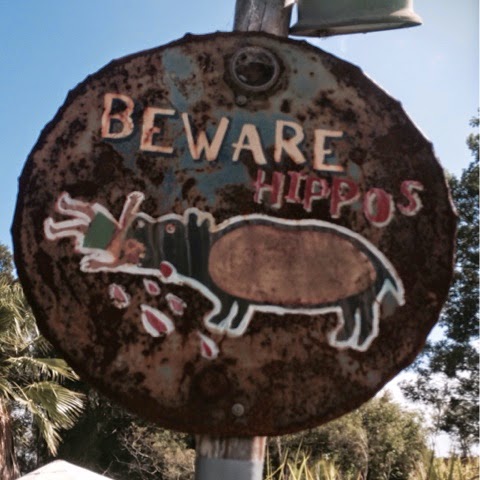 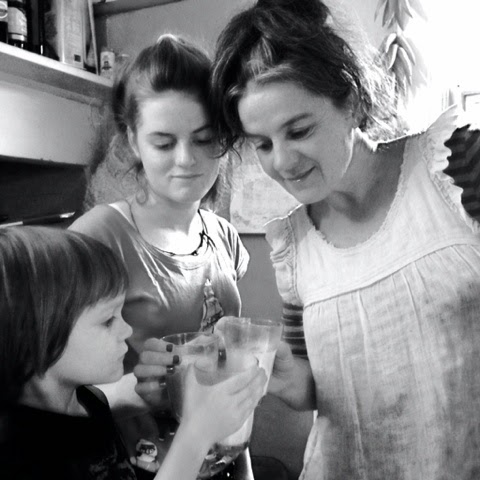 I'm not going to talk about the fact I have neglected my blog. I'll just break the drought.
here...

knitting has been slow for a while, but a fox is in the making: pattern is Sophisticated Mr Fox 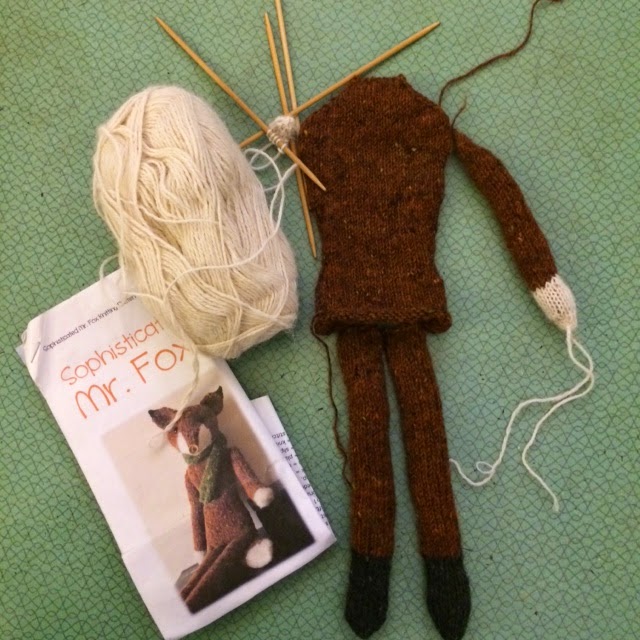 The cooler weather is on it's way and I turn my mind to woolly things, knitting, spinning, cosy nights creating. I even read a book which whet my appetite for the cool inner creative evening: Burial Rites by Australian writer Hannah Kent. set in Iceland in 1829. Wonderful read, and the best part was being immersed in the domestic world of this time and place. scenes of knitting, mending, even gutting animals was so goooood! 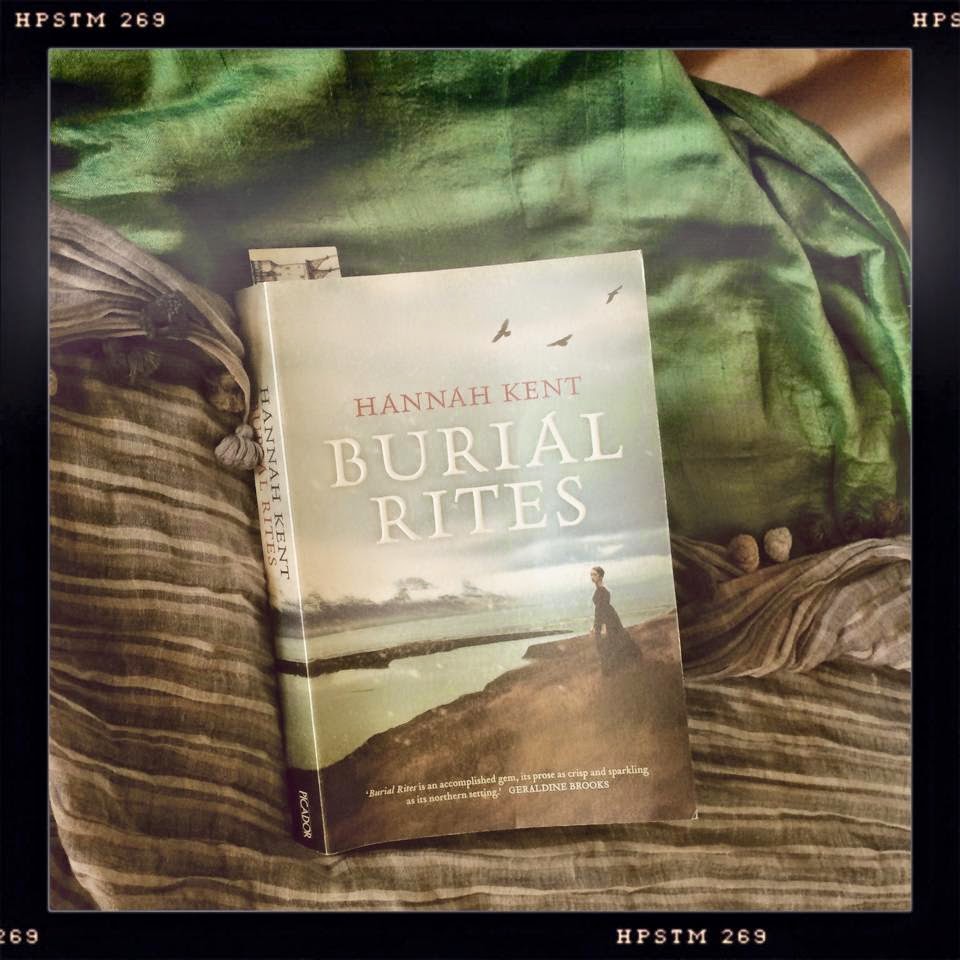 I loved it so much I was grieved to finish, so I used a gift voucher which had been sitting around since last year (from my choir of seven years I finished up with) to purchase some fluffy clogs, so I could feel I was still in Iceland (there was no mention of clogs in the book I might mention, but even wearing Swedish shoes was close enough). 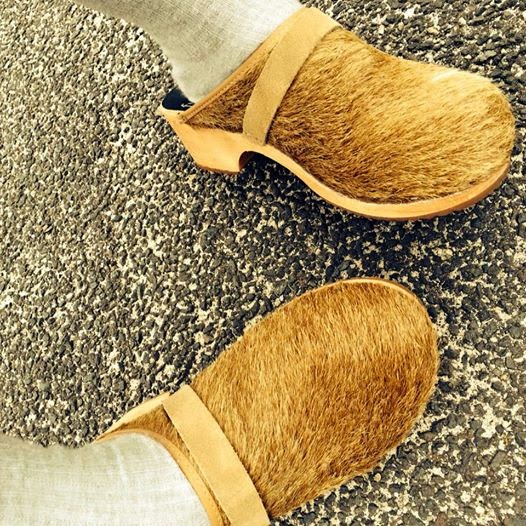 my girls have been keeping me very busy as their "mum-ager" of Charm of Finches since mid last year. There were videos, paper mache boats, shows upon shows and vintage dresses. We spent a lot of the summer going to Folk Festivals so they could perform. It meant seeing and meeting many wonderful musicians and having adventures. And it continues. as does school, driving kids around town, juggling my work.... 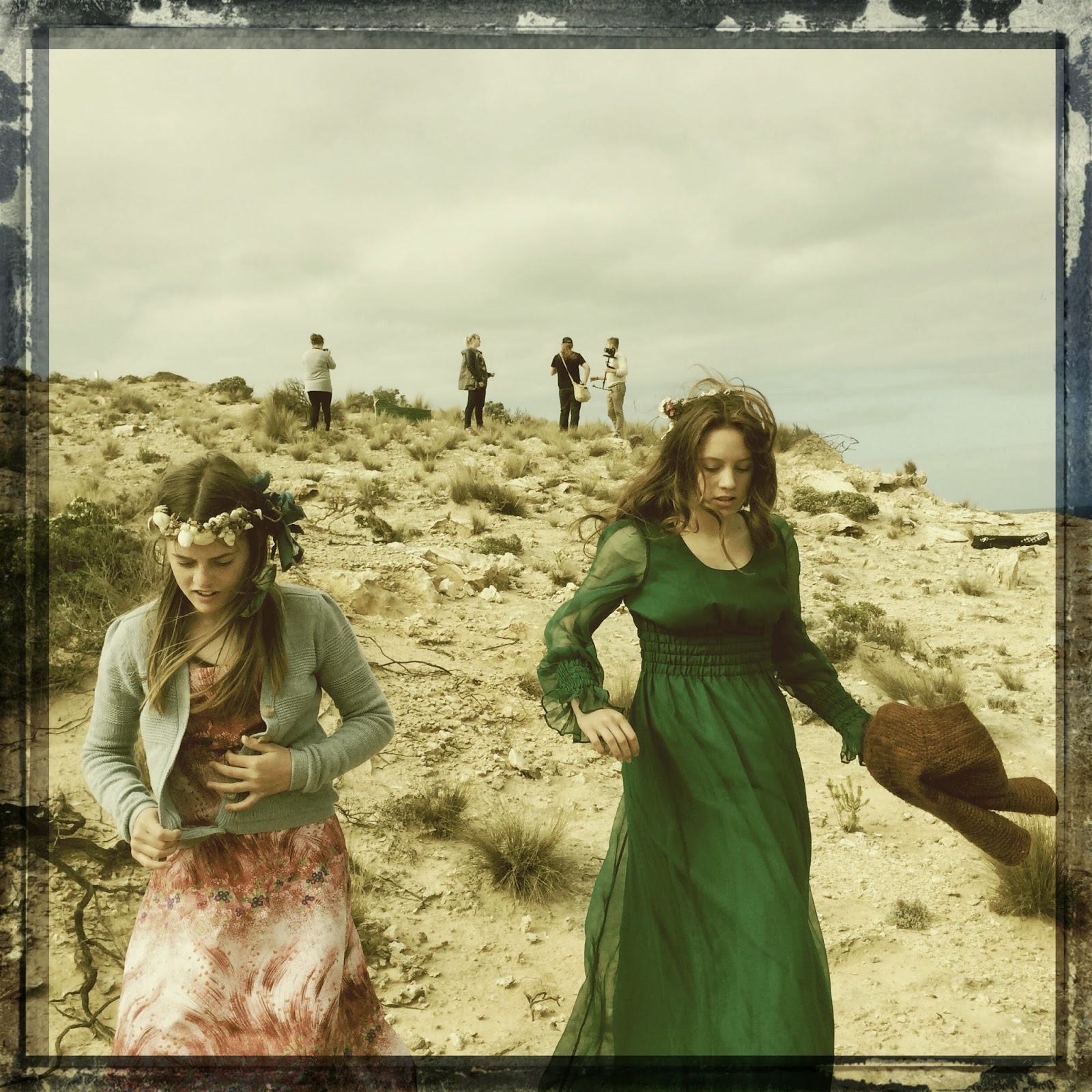 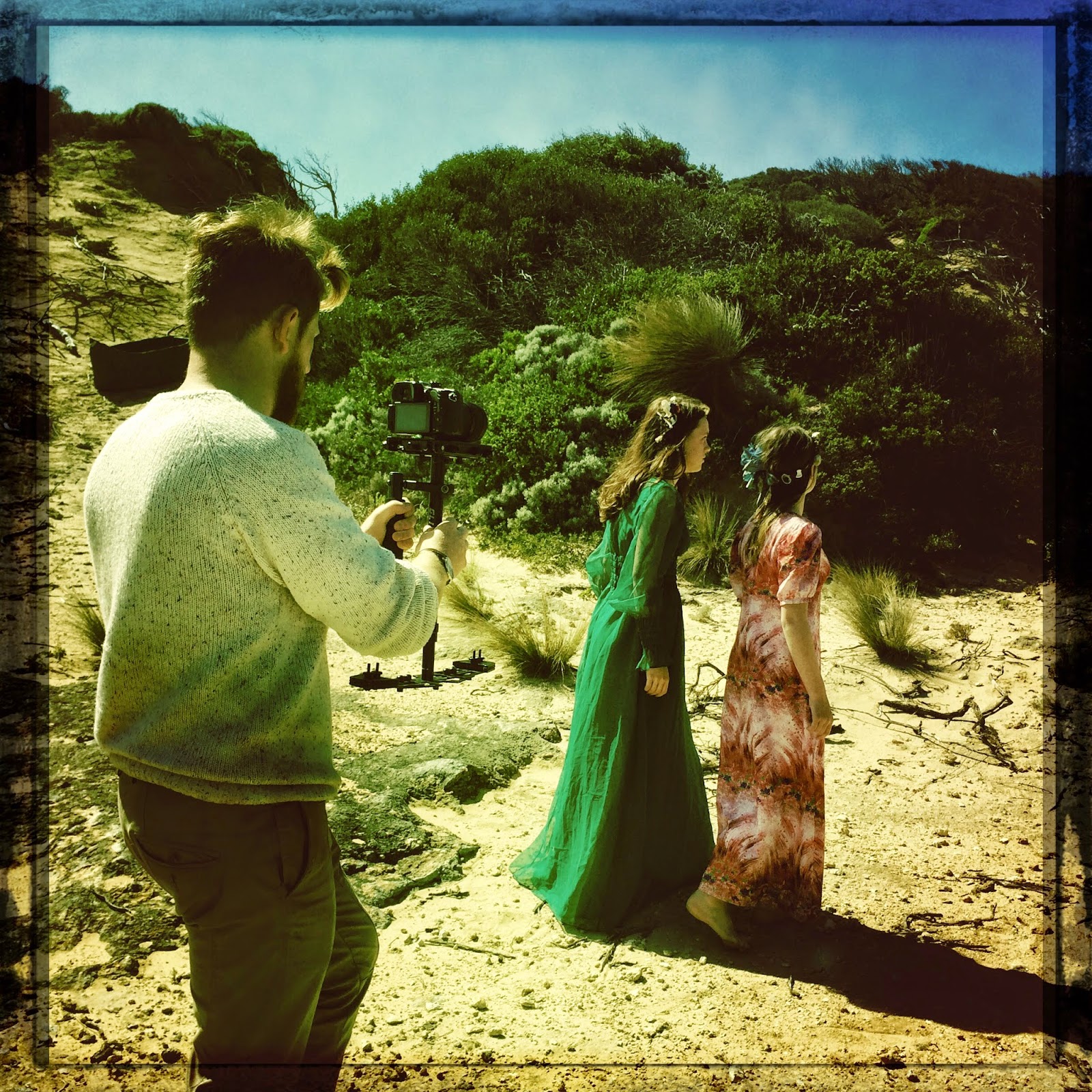 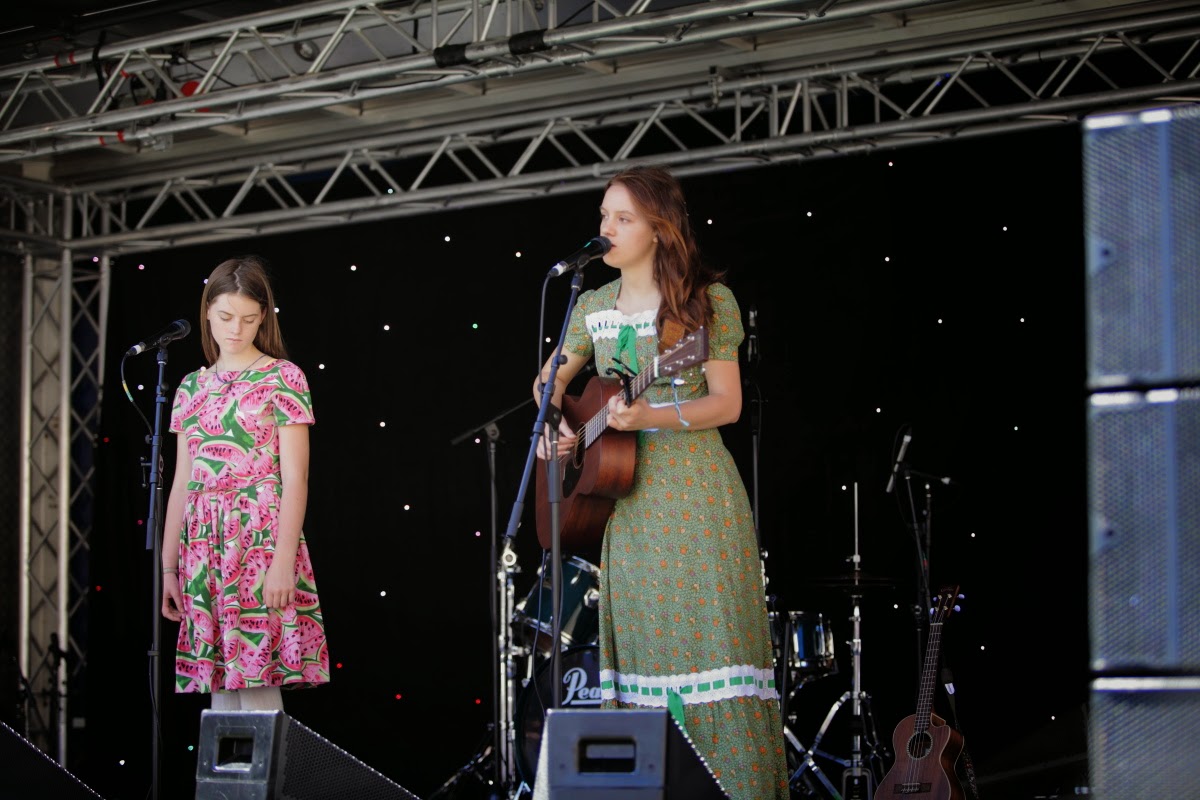 I took over directing a community choir last year, and I love them so much. they are there for the joy of each other and singing together. We have a ball! half of them showed up for a community event to perform some songs, and they fearlessly and joyfully sang their hearts ourt and filled the room with the most heavenly atmosphere. that's me at the front introducing a song. 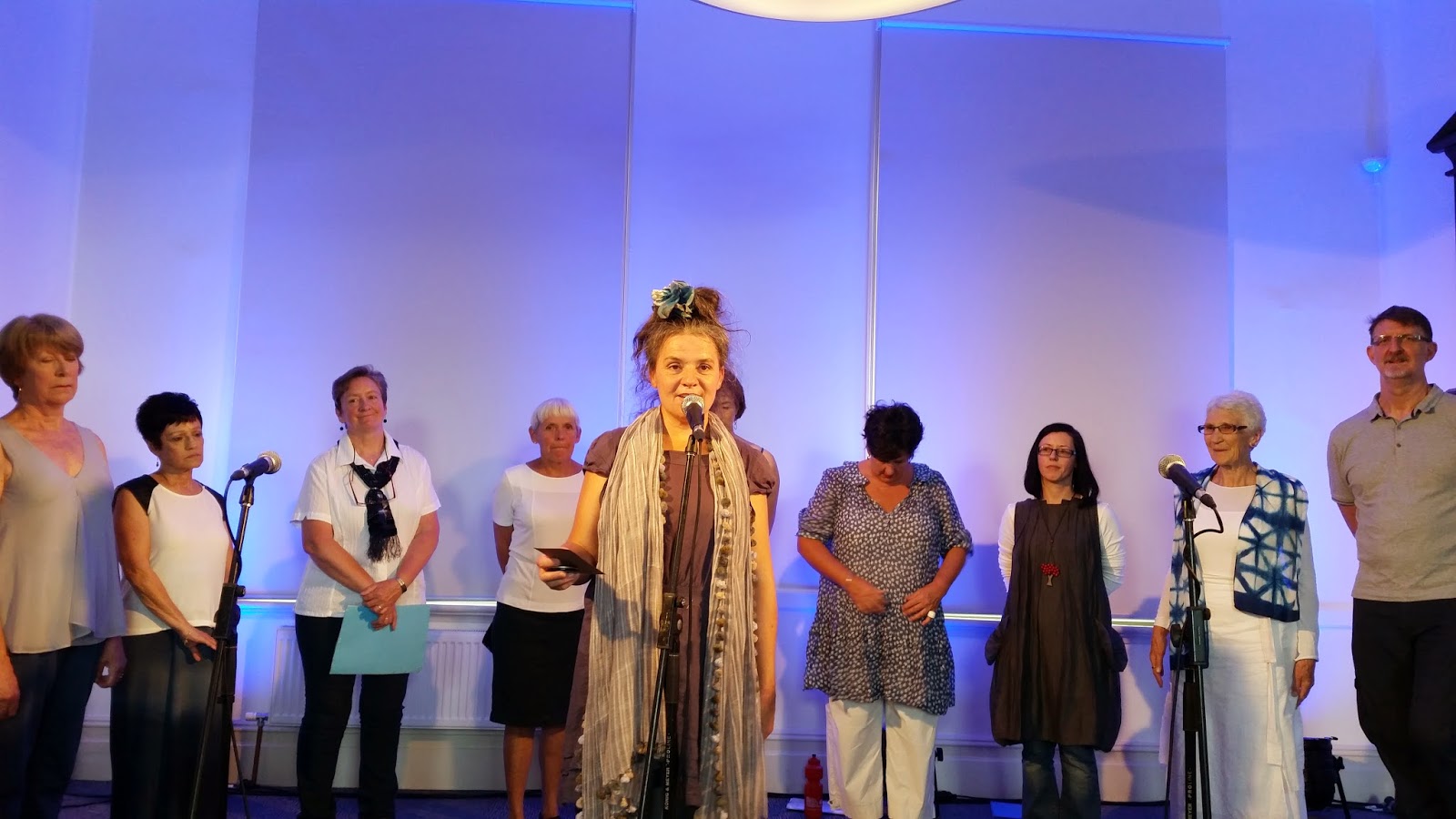 joining the yarn along with Ginny here.
Posted by Jo Windmill at 9:00 PM 1 comment:

I have a new friend! We met over two intensive days of rehearsing for a big extravaganza fashion-y theatre-y thing, and my job was kinda to make her laugh because the director said she hired her for her smile! I have to agree, Ellen Sørensen lights up the room when she smiles.


SHE DOES WHAT?
Now, Ellen does something stunning. She cuts paper very intricately. She makes layers! She lights her pictures from behind, sometimes they are in a box with a peep hole! All this is exciting enough! Then Ellen tells me she loves telling stories in this way and, well...we got on a roll about storytelling...more on that later!
It kinda began for her in her second year in Art school back in her hometown of Auckland. But not really! You see, Ellen grew up with her mum and dad, big sister and grandfather all encouraging her to tell stories! And they told her their made up ones. Her grandfather (Danish born) and her mother would spend their time embroidering, and this instilled in young Ellen a sense of beauty and taking time to make something, the handmade, and how normal and very human it is to tell stories. Team that with living in some very beautiful seaside, forest-y places near Auckland (did you know there are NO SNAKES in New Zealand;  not one ), which Ellen wandered through, and you have the makings of a richly imaginative child with a deep connection to nature.
I think now is a good time to show you what Ellen has been up to!! (it's 8 minutes)


Let The Light In m4v from ELLEN SORENSEN on Vimeo.


WOW!
Now as you can see, Ellen is also a musician! That's really a bit unfair, I hear you say, for one person to have such a concentration of talent.  Ellen started tinkering freely on the piano when she was 6 years old, and began lessons at 7, doing piano exams, becoming quite accomplished by the sounds of it. She went to art school when she finished school, moving into urban Auckland to live an old dentist surgery.
Last year (2013) Ellen moved to Melbourne, looking to connect with other artists and to feel less isolated. She's already had a solo exhibition of her paper cuts entitled ""A Place To Call One's Own" at the Melbourne City Library. The works were placed in little nooks and backlit with little lamps. Damn! I missed it!
Only yesterday I heard Ellen's song, "Big Bear" played on 3PBS on the show Homebrew.
I tell Ellen she really has landed on her feet,  as we sit in a cute Thornbury backstreet cafe.
Have a listen!
Ellen explains she now belongs to a collective of musicians called Air Punch Collective , who have a novel  song club idea going and are who are putting on a show soon. The show concept is interesting: it's called "mixed doubles" and everyone pairs up and collaborates on each other's songs. She gave me a listen on her phone of a recording she'd made at the rehearsal with her "doubles" partner David Carlin . It sounds sweet! In fact, Ellen's harmonies are very striking on her song Big Bear. I asked her did she sing all the harmonies? Yes. They sound free, and intuitive, and in fact, the recording sounds like a big party! Just loose enough to have energy, intimate enough to draw you in. And the story: Ellen's own grim fairytale. I ask her which fairytales she loved as a kid: Hansel and Gretel and she had a Danish copy of The Little Mermaid by Hans Christian Anderson. Unsanitised. The mermaid has to cut her own tail off. We start ranting about how great real fairytales are! How children need the dark, they need those archetypes intact. If we make fairytales nice and polite and safe we are robbing children of the images we as humans need in life to access our own stories and our own shadow self.

And telling her stories through fairytale imagery and leaving space for others to relate with their own stories is what Ellen likes.

I ask Ellen about her moniker "Shadow Feet".
"It has to do with the retrospective way I write my music: I had this image of a character wandering back through time being followed by it's shadow and  memories of places and experiences that I've had forming my present, and that's how I felt about my self when I wrote them,  being informed by my shadows." I love that!

Thank you Ellen for a lovely chat!
x
Jo

Posted by Jo Windmill at 5:03 PM No comments:

After spending the day reluctantly trying to deal with bureaucracy so I can continue to moonlight as a casual relief teacher occasionally, my mind feels particularly clouded. Ughh!

This kind of head space calls for some knitting: curative occupational therapy for sure! I'm almost finished my Agnes in the most divine silver grey Drops Eskimo. I decided to make the ribbing extra long, starting higher; and a small child I met on the weekend suggested I do extra long arms and put in thumb holes. I rather like that idea! 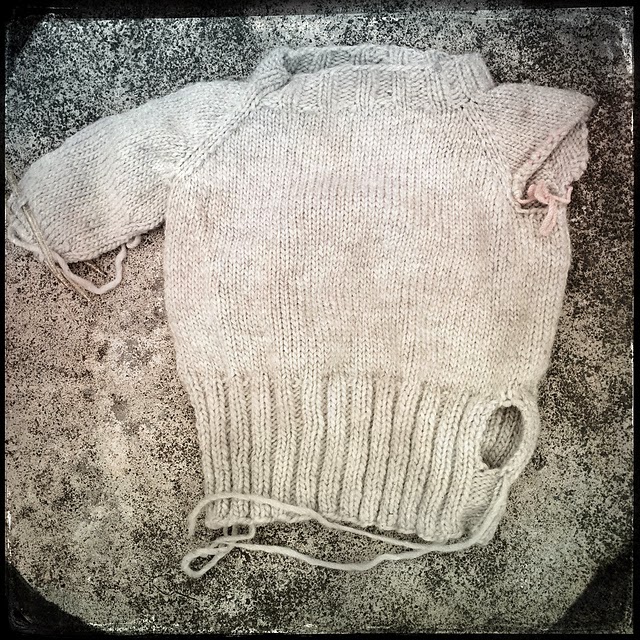 It's been school holidays here, and the girls have had a well earned break from their busy life as full time school girls and busy musos! We spent the weekend in a mountain range with many wonderful folk musicians, doing workshops. One lovely man recorded birdsong and a snippet of Mabel practicing her song. Here it is (a few minutes in):

And here is an amazing film which my three thespian children made yesterday as a birthday present for their dad!!! Enjoy!! Here is the You Tube link if you prefer to view larger.

Posted by Jo Windmill at 8:49 PM No comments:

Pattern: Agnes by Melissa La Barre
Yarn: Drops Eskimo ( silver grey 53)
(pictured with an edition of Pom Pom Quarterly which I always read from cover to cover! so great!) 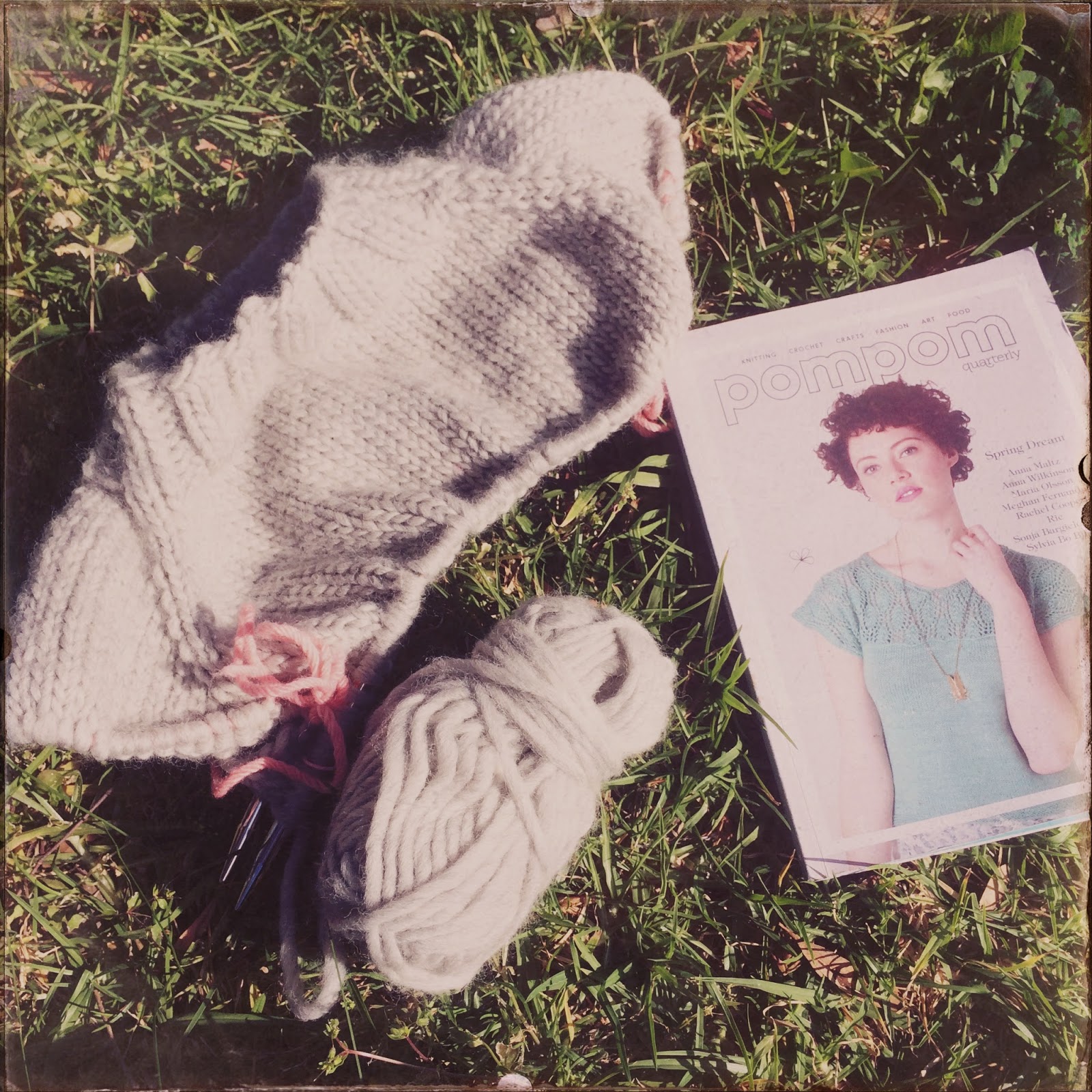 And my recent foray onto the Catwalk: Liberty of the Press! A collection of amazing outfits designed by a local couple who screen print (and still cut out their images by hand), based on the incredible Press dress of 1866 designed by one Mrs Mailda Butters! Such a lot of fun!! I look a lot like the Bride of Frankenstein: the middle years, yes! 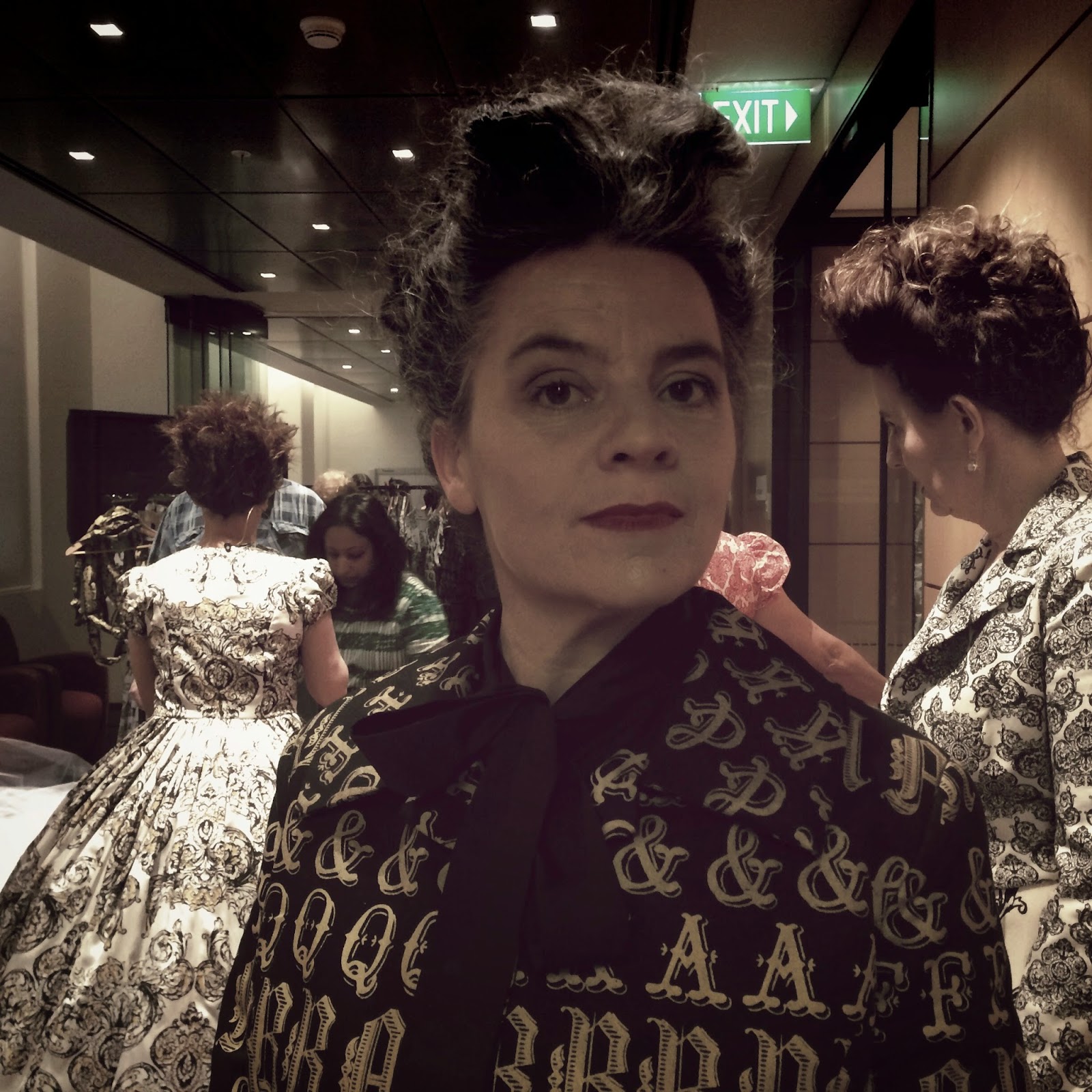 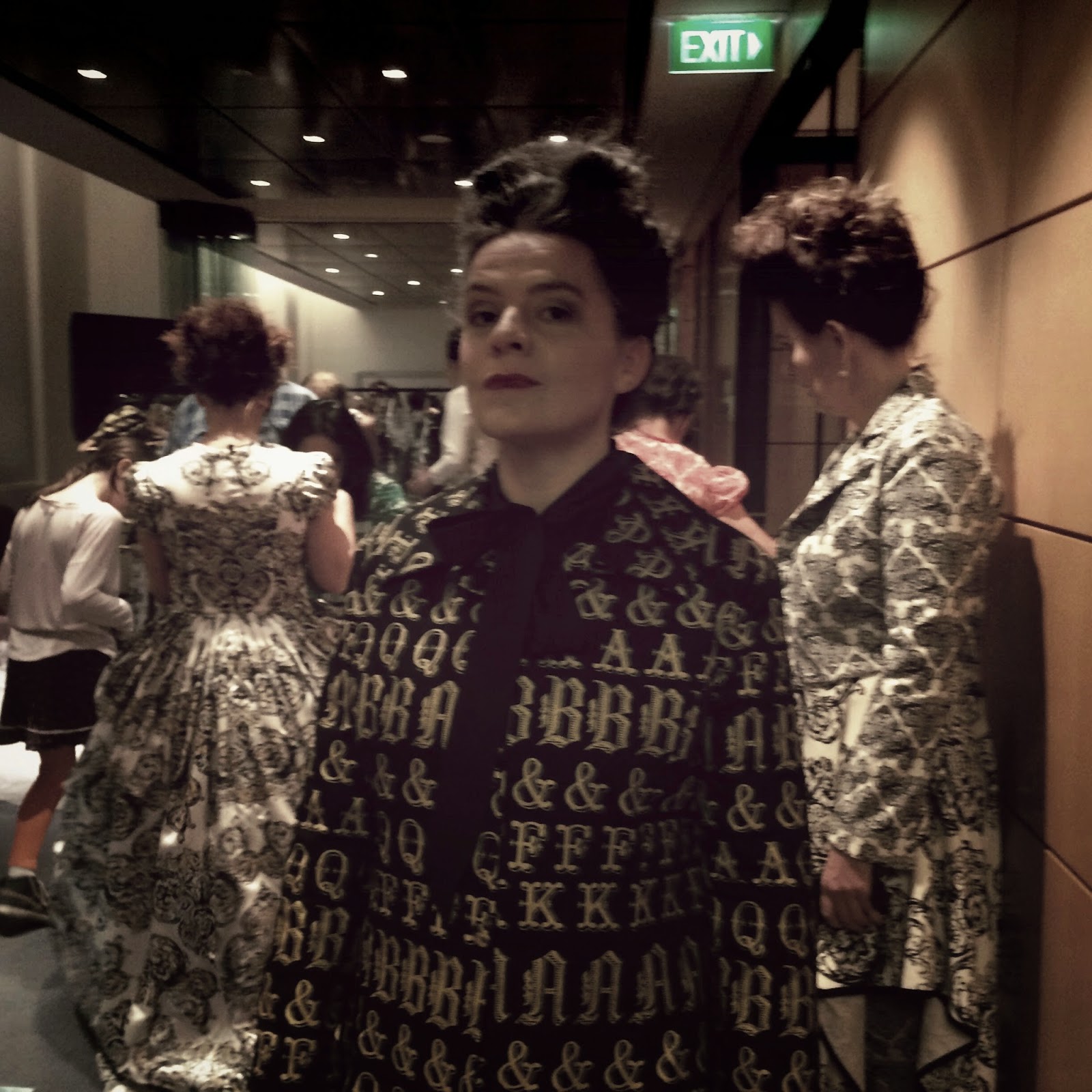 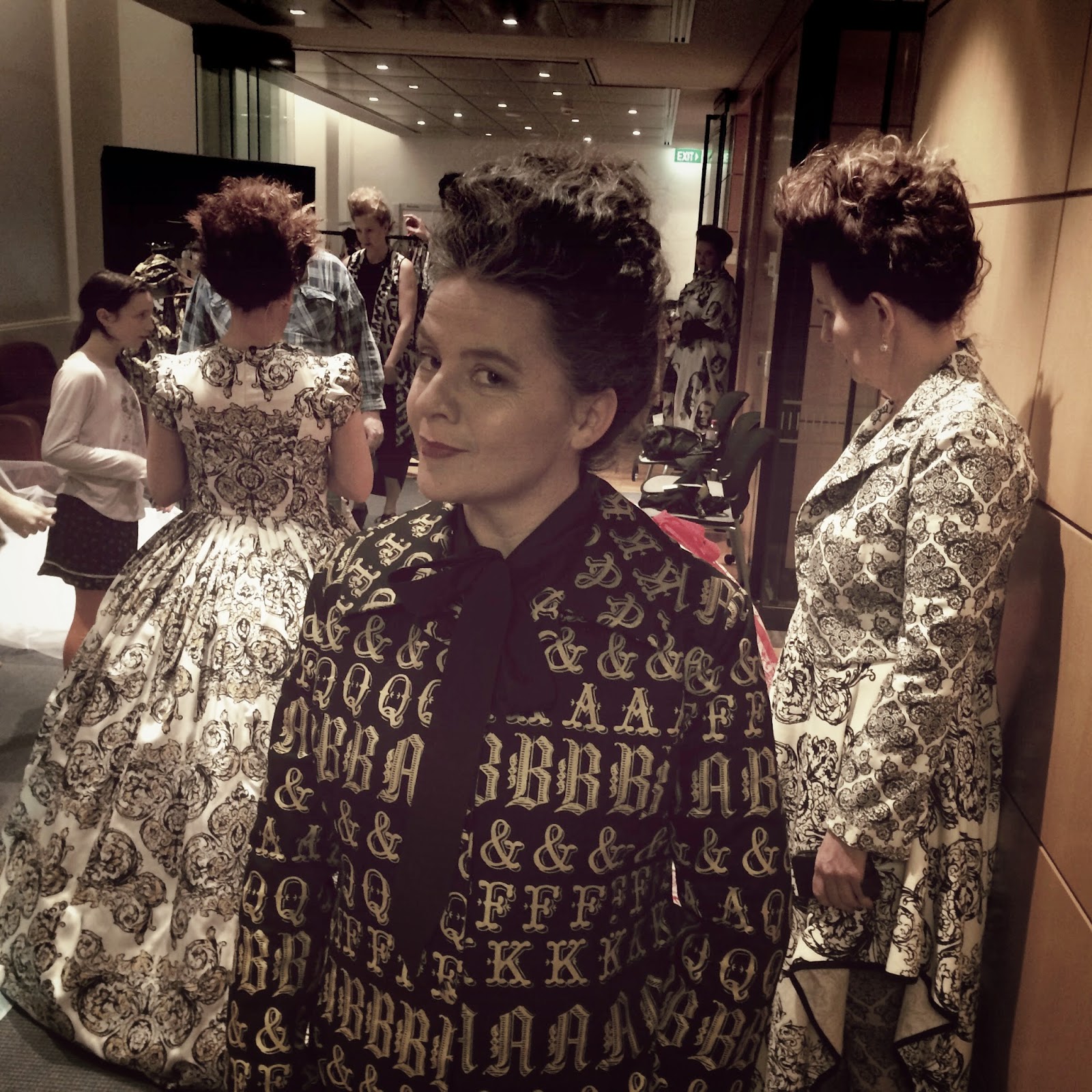 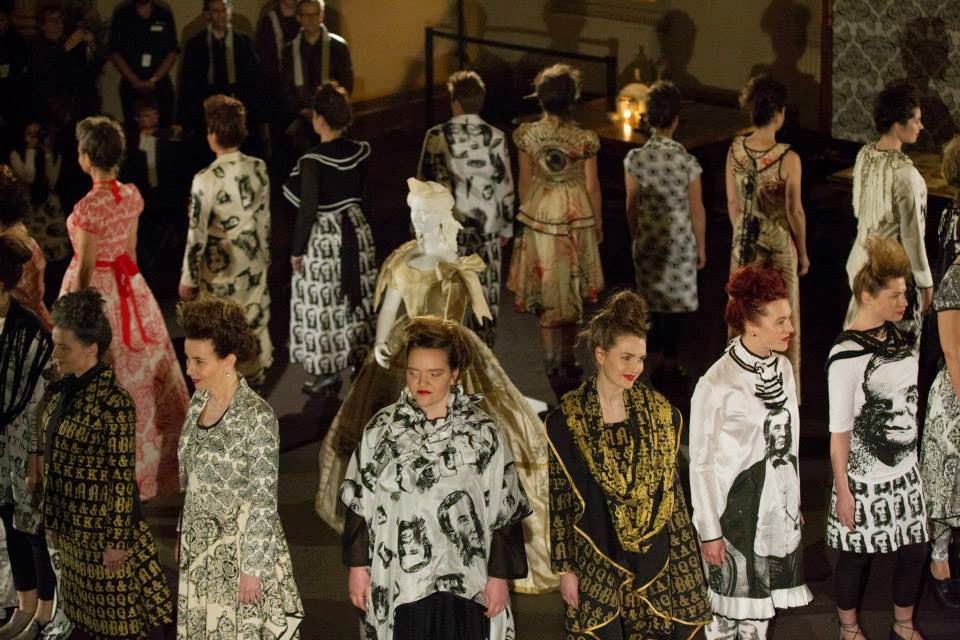 And my own dear Ivy with her brother , making a dash in her "Lady Grace" outfit for book day. 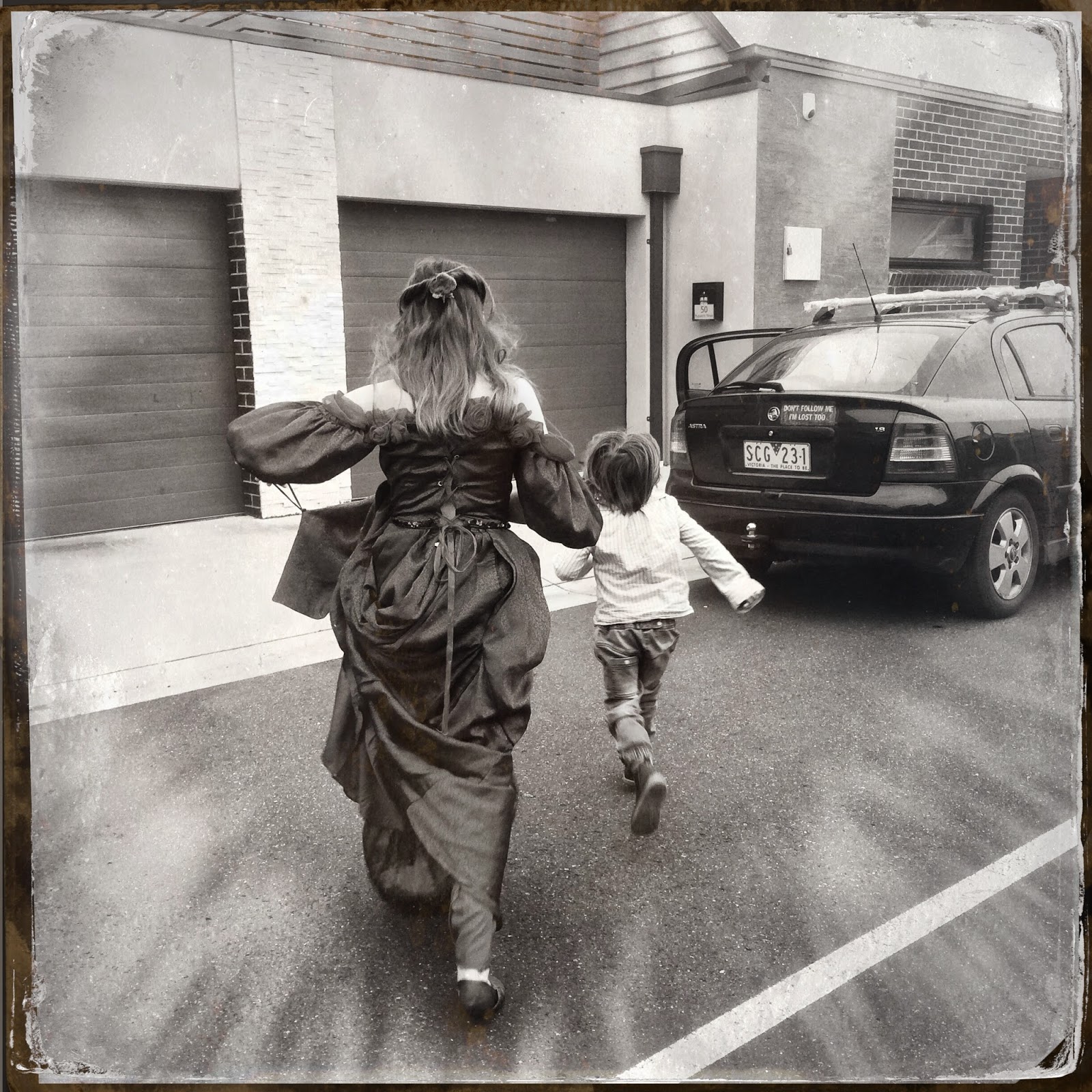 Posted by Jo Windmill at 4:01 PM No comments:

Email ThisBlogThis!Share to TwitterShare to FacebookShare to Pinterest
Labels: knititng

I have neglected my blog, as I have neglected my knitting, spinning and everything else to do with my fibre passions! But for a good cause I believe, and not for to much longer.
I have become what somebody described a few days ago as a "mumager". Meaning I have been facilitating my two talented singing daughters and their music project Charm of Finches.
A beautiful delicate project, involving much love, trust, enthusiasm and support from many people, friends and strangers!
Last November Mabel decided she wanted 2014 to be the year she recorded her music. It coincided with her being given her Year 8 project to consider over the Christmas holidays, in which time we enlisted the help of a lovely new friend who offered to record the girls. From a few casual home recordings in the hills burnt onto a few blank CDs for friends with hand drawn covers, the project grew, and after an astounding Pozible crowd funding campaign involving many hours of planning, recording, filming, listening, photographing, performing, sewing and stitching, the project is almost coming to it's conclusion with the official launch in two week. It's been huge and fun, wholly creative and exciting!
Here are some highlights in picture:


And in two weeks, the girls will play  a concert to launch this little EP with six beautiful heartful songs into the world. In actual fact, the music has already begun its own life in the universe, already playing in lounge rooms and kitchens and cars all around the world. I love that idea the most. Whether  you are writing a book, making a  film, painting a picture or recording music or some other creation, once that little piece of you has burst out of its egg, it will have adventures you will never dream of, and many times, never even know of! 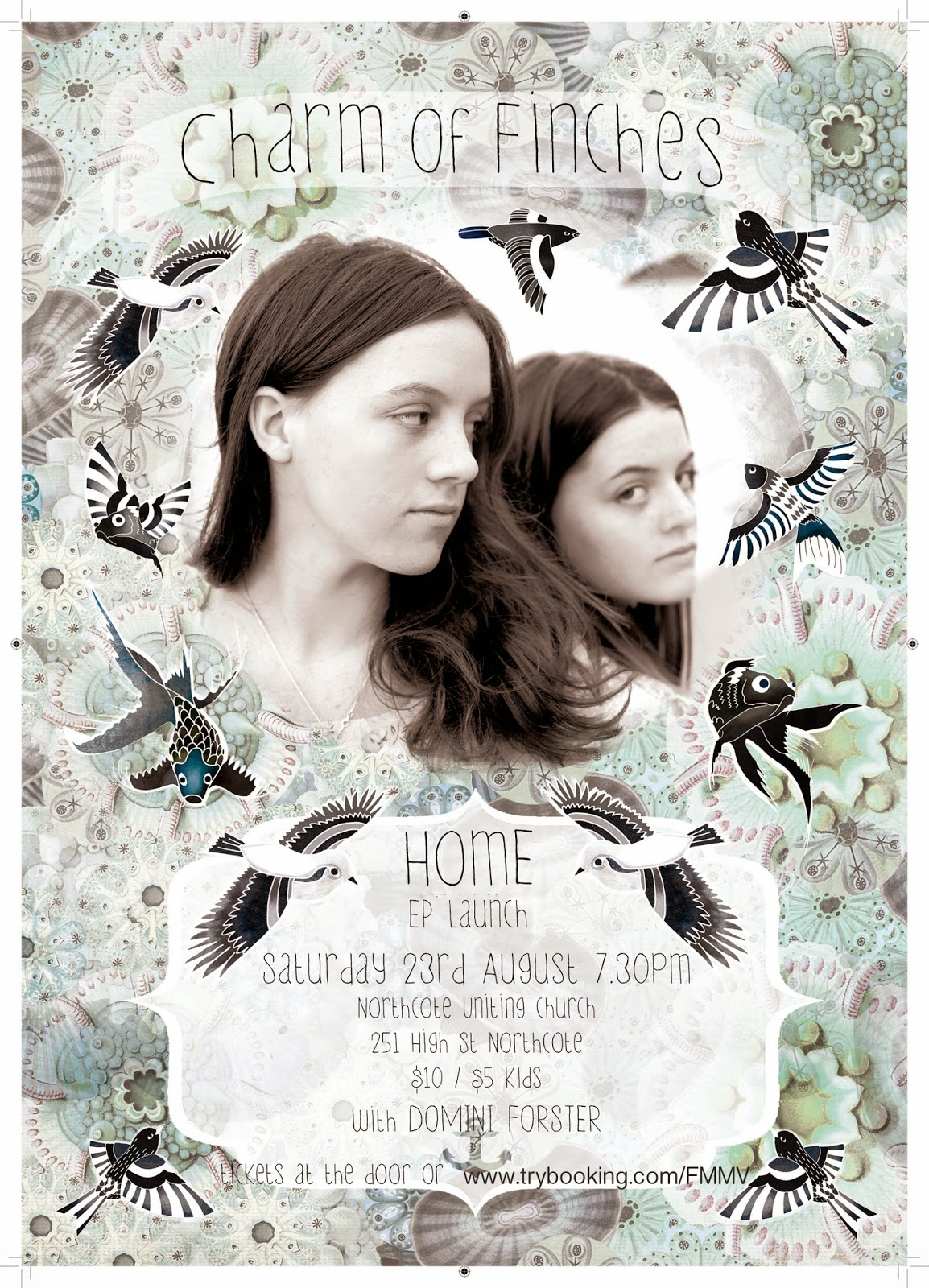 and the music: you can listen here! 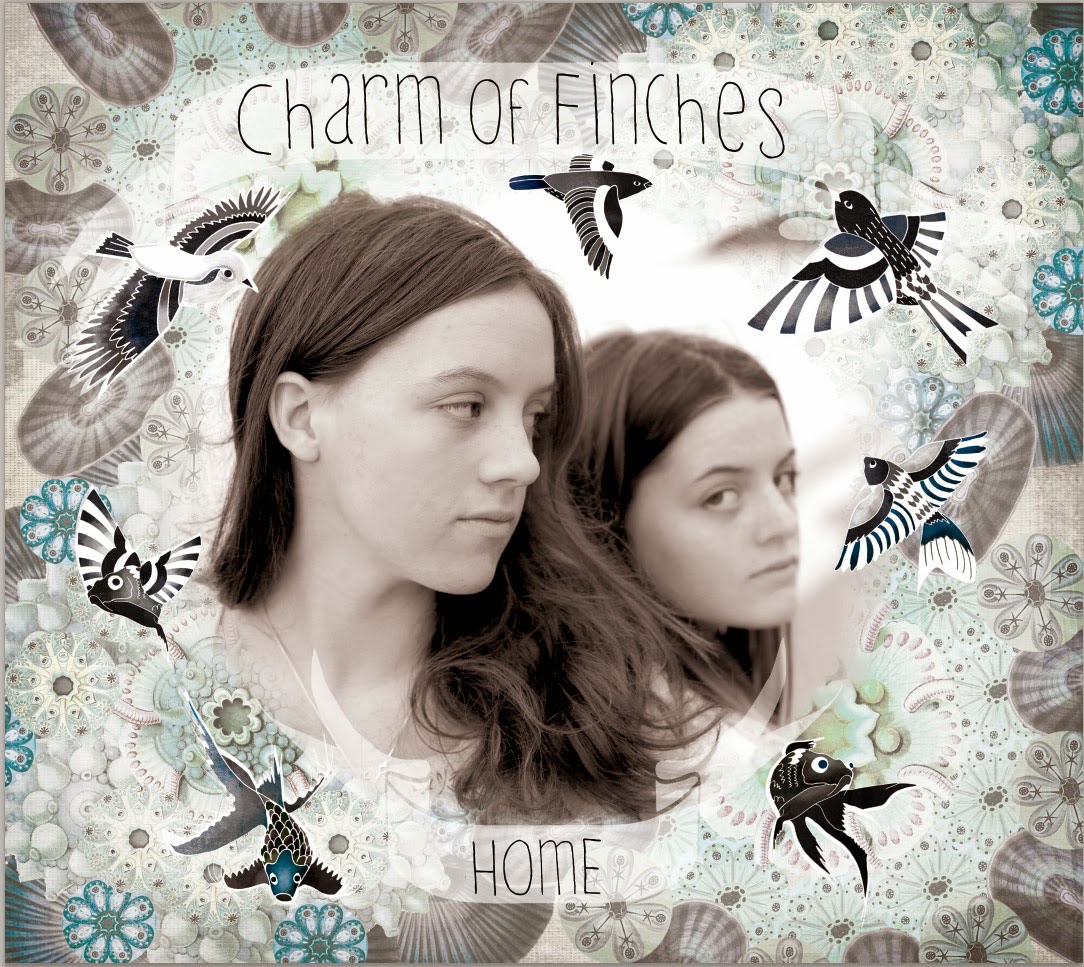 I'm proud, I'm excited, I'm amazed,  I'm in awe of my girls, I'm grateful for all the wonderful people in my girls' life who made this project a success. I'm a wee bit tired right now, and I must now go and sew some bento bags and post them off to the last Pozible supporters patiently waiting for their CD!